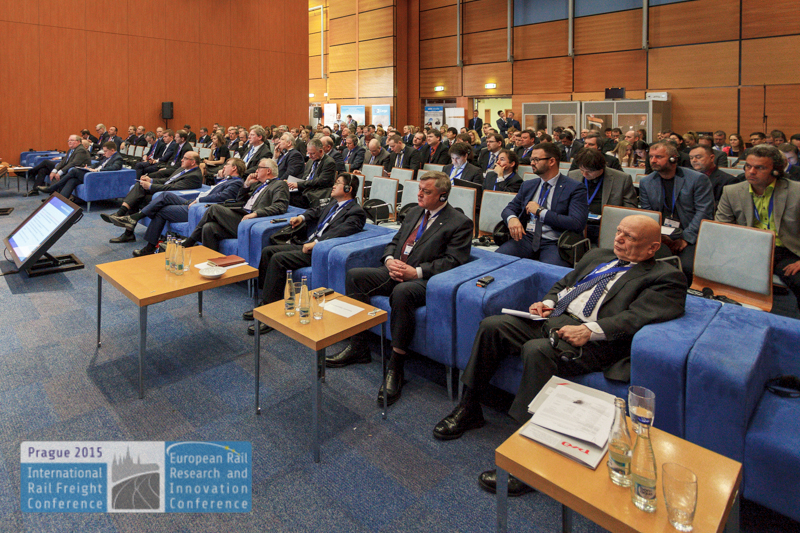 The Clarion Congress Hotel Prague **** was the venue of the 5th International Rail Freight Conference and exhibition relating to rail freight transport (IRFC 2015) from 18th to 20th March 2015, this time in conjunction with the 1st European Railway Research and Innovation Conference (ERRIC). The combined ERRIC/IRFC 2015 conference bore the motto “Research and innovation – the driving force of competitiveness”. The conference was organized by OLTIS Group under the auspices of the Deputy Prime Minister for Science, Research and Innovation, Ministry of Transport of the Czech Republic, Ministry of Education, Youth and Sports, and international organisations such as UNIFE (Association of the European Rail Industry), UIC (International Union of Railways), CER (Community of European Railway and Infrastructure Companies) and OSŽD (Organization for Cooperation of Railways). The conference was also supported by 13 partners, particularly from international organisations.

This year’s event was attended by 301 participants from 27 countries, including 58 top officials of the leading rail companies and organisations. The list of speakers was a record number of 75; speakers included representatives of the European Commission, Ministry of Transport, UIC, ERA, UNIFE, CER and other major European and Asian organisations.

The programme on the first day included the address by leaders of international railway organisations and large companies on topics relating to research and innovation, the competitiveness of railways, liberalisation and the potentials for cooperation.

João Aguiar Machado, Director General of the European Commission Directorate-General for Mobility and Transport, emphasised in his speech the need for increasing the share of railways in the total volume of shipments: “The share of railways remains very modest compared to other modes of such as road transport, accounting for 90% of the market share. There is no noticeable development in rail freight. Over the past 15 years, the share of rail freight is stagnant at around 10-11%, compared to 45% for road freight transport and 37% for maritime transport. Consequently, there exists without doubt room for improvement. There is a clear need to take substantive steps for both passenger and freight rail so that it can assume a greater share of the freight demand in the coming decades. It shall of course also benefit our environment and our congested roads.”

Presentations on the first day of the conference were divided into three thematic sections:

During the introduction, the Czech Transport Minister Dan Ťok spoke of the rail infrastructure development in the context of the 4th EU railway package. He expressed support for railway development and accessibility: “Within the Czech Republic our main rail lines are stretched to 95% of their capacity. Neighbouring countries have similar experience with railway workload. I stress that the Czech Republic, in particular, has one of the densest railway networks in Europe. The demand for rail transport exists and is real, and for that reason we cannot be talking about the lack of competitiveness.”

Vladimir Yakunin, Director General of the Russian Railways and UIC chairman, in his speech pointed out that the conference themes are very topical and thorny. At the same time, this conference is unique in Europe as it is prepared to address these topics. “The European railways should be seen in the wider context of meaningful participation in logistics processes. Complete freight transport should be seen and managed as a process.”

Jean-Pierre Loubinoux, UIC Director General, emphasised in his speech four questions, which may be considered as the four pillars of the railway system: “accessibility to infrastructure and networks, innovation and creativity, understanding and knowledge, and interoperability and intermodality.”

During the second day, the conference continued in two parallel sections (ERRIC + IRFC). The European Railway Research and Innovation Conference (ERRIC) offered the opportunity to familiarise with the SHIFT²RAIL initiative and its objectives, the framework plan and the various innovation programmes. The conference programme was divided into the following specialised units: European Rail Research, IT solutions for problem-free and attractive passenger rail transport, the knowhow for sustainable and attractive European freight transport, cost-effective and reliable high capacity infrastructure, and other railway research and innovation activities, and the related European projects.

The International Rail Freight Conference (IRFC) introduced, in its fifth year, the experience and successful projects relating to the international railway freight transport, especially between Europe and Asia. The conference focused on the following regions: Euro-Asian Land-Bridge, market development of rail freight and intermodal logistics, and technical support for rail freight transport.

The conference was accompanied by a trade exhibition with 15 exhibitors from rail carriers, rail industry, IT companies, international organisations and media.

During the third day of the conference, on 20th March, an excursion was arranged to the Prague Metro’s facilities. Participants visited the underground stations not yet opened: Nemocnice Motol, Petřiny, Veleslavín and Bořislavka. The whole event ended with a historical sightseeing tram ride and lunch at the U Kalicha restaurant. AŽD Praha was the partner of the third conference day.